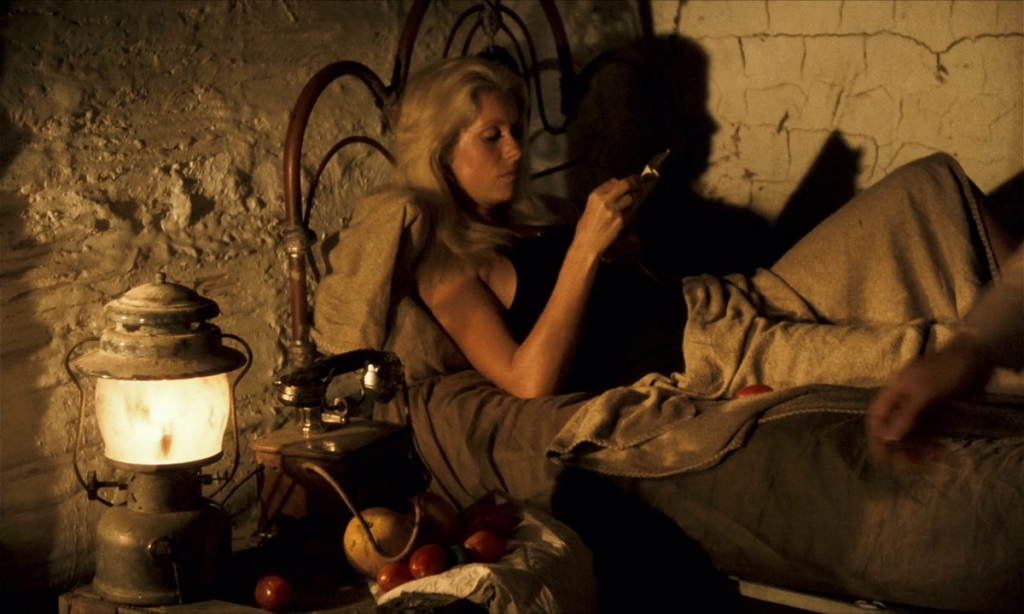 They meet in Caracas by chance. Nelly (Catherine Deneuve) is a young woman who is about to marry Vittorio, but realises she doesn’t want to and runs away from him. Martin (Yves Montand) is a middle-age man who left behind his career as a famous perfumer to seek out a more tranquil life on an island, off the coast of Guaira, Venezuela. He gets her out of trouble. She gets him into more trouble. Montand perfectly offsets the antic behaviour of Deneuve.

Young, free-willing and beautiful, with energy to spare and perfectly articulated rapid-fire speaking, Deneuve sweeps you off your feet. You end up following her around, because she never stops, she is in constant motion, out-running and out-talking Montand. In an interview between her and the director of the film, Jean-Paul Rappeneau, Deneuve confessed that talking fast was a family defect, remembering how “Truffaut used to say that my coming from a numerous family with four children, all girls, may have led to that. It was always a competition among sisters, who to take the first place and the second place. Words played a major role.” She also mentioned the influence of the American screwball comedies and the fact that what she loved about them was the rapid succession of events and talk. The screwball moments in Le sauvage are beautifully pulled off, and she glides through them so naturally, and are in beautiful contrast to the quiet moments when she is alone that look like she has just stepped out of a painting or to the scene when she quietly tells Montand that she wants to stay with him on the island.

Le sauvage feels like the movie that liberated Deneuve’s own personality on the screen. “I am shocked when people talk about me and sum me up as: blonde, cold, and solemn,” she would say about her image of porcelain beauty imprinted in the audience’s collective memory. “To film, the beauty of Catherine Deneuve is a joy, an enlightenment,” Jean-Paul Rappeneau said in an interview for Télérama. 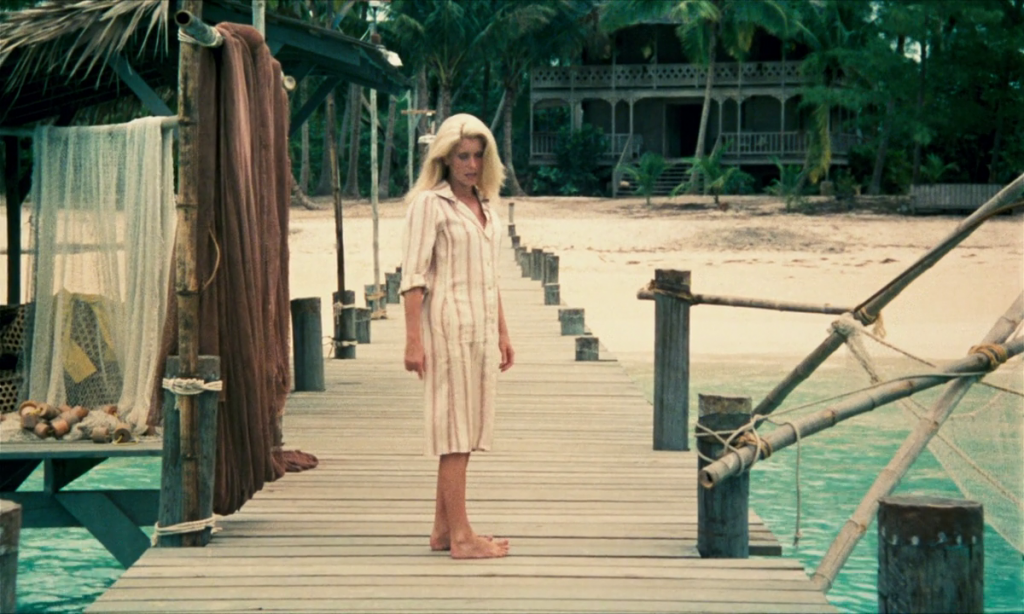 For almost six decades, Deneuve has been the embodiment of the French screen icon, of its allure, sophistication and cool and quiet elegance, having worked from the very beginning, the 1960s and 1970s, with some of the best European directors, such as Buñuel (Belle de jour, Tristana), Truffaut (Mississippi Mermaid, Le dernier métro), Polanski (Repulsion). Most notably in Belle de jour, Catherine Deneuve’s image and sexuality was signaled through clothes and through an association with fashion. The exclusivity of her YSL wardrobe (the film ensued a long-term, lifelong friendship with Catherine Deneuve, their relationship becoming an integral part of the cult of Saint Laurent) forms its own narrative in Buñuel’s fetishistic film (“My fascination with fetishism was already obvious in the first scenes of El and the boot scene in Diary of a Chambermaid,” Buñuel wrote in his autobiography, My Last Sigh), where her highly polished surface and her severe and restrictive clothes act as barriers to sexual expression as well as the very means for reaching sexual fulfillment. “The novel is very melodramatic,” Buñuel further elaborated in his book about Joseph Kessel’s novel Belle de jour, “and it offered me the chance to translate Séverine’s fantasies into pictorial images as well as to draw a serious portrait of a young female bourgeois masochist.” Saint Laurent’s Designs for Séverine “pitched subversive chic against a frigid conservatism with devastating success,” wrote Alicia Drake in her excellent book, The Beautiful Fall: Fashion, Genius and Glorious Excess in 1970s Paris. 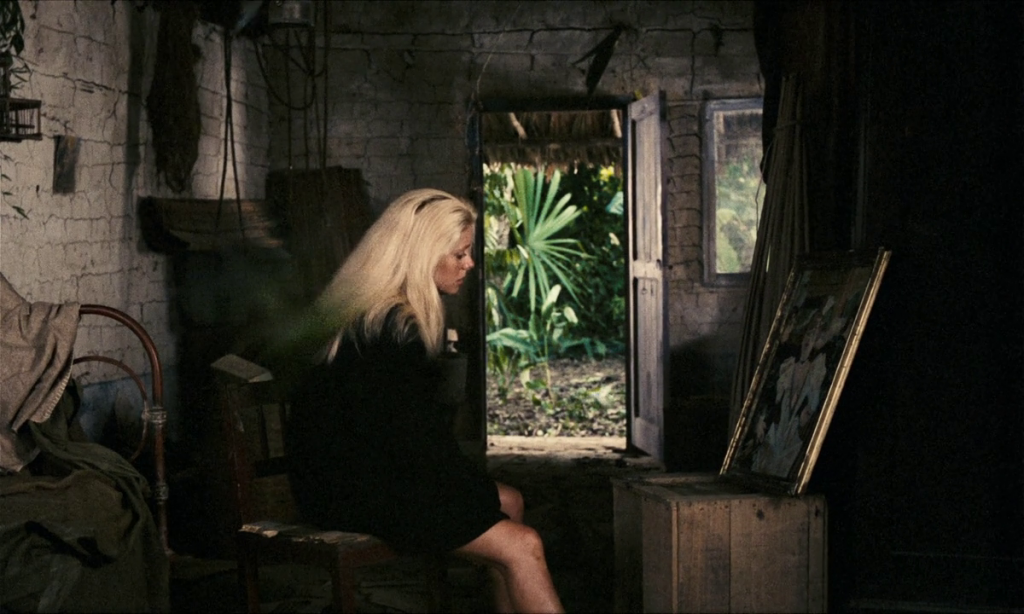 Her image in Le sauvage is hardly associated with fashion, and that’s part of the reason why this role is so fresh and different and liberating. After the opening sequence, when she is wearing an elegant white dress at the party celebrating her up-coming wedding, she dresses in jeans, white shirt and trench coat when she runs away. Every woman’s attire, the most timeless of them all. But, in movies, the trench has played such an ambiguous garment, impersonating so many roles, and here the trench coat can also hide the secret of someone who plans something dangerous, or just to change her life. Then we see her in a striped shirt dress for a big part of the action – there were four copies of the dress with different degrees of wear depending on the story progression. After her dress is torn to shreds after a plunge in the ocean, she practically lives in Martin’s shirts, t-shirts and cardigan which she steals off the hanging wire. Oversized and practical, they are not just the perfect attire for the island, but by wearing not just masculine but men’s clothes, she creates this alternate allure, becoming much more feminine, and more attractive than she has ever been on screen. 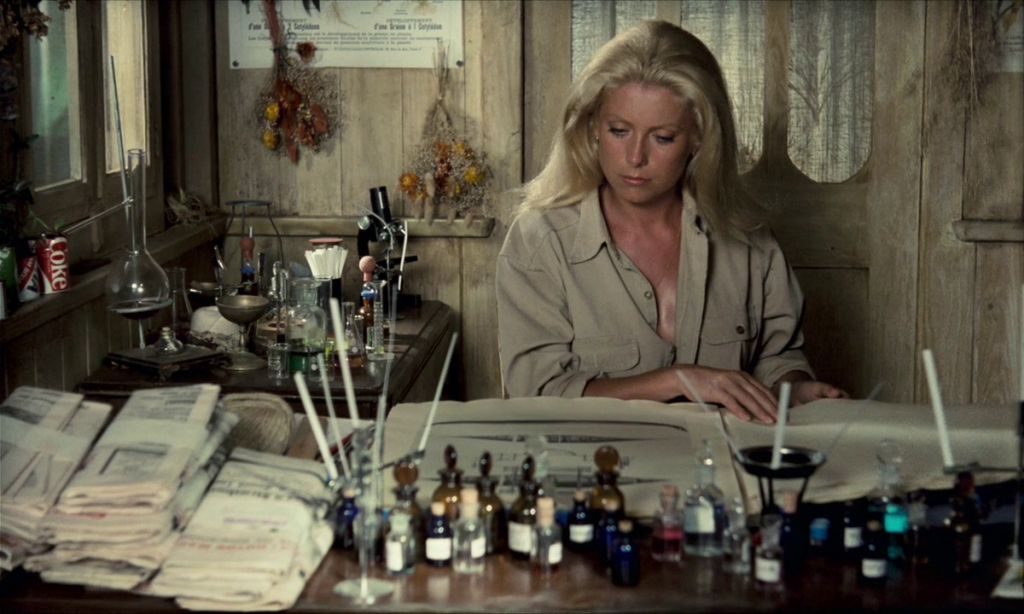 Delon, Belmondo, Borsalino and The myth of the gangster dandy

Breaking the rules of a leading lady: Bette Davis in “The Letter”

This entry was posted in Film, Film costume, This summer we’re channelling . Bookmark the permalink.