I am fascinated with children’s books. I have kept all my childhood books, my almost three-year-old son already has a considerable collection and I have started to even buy him books to save for later. Yes, you could say the children’s books in our home are as much for him as they are for me. And there are many beautiful ones. But when Vlad Niculescu recently recommended me William Grill’s book, The Wolves of Currumpaw, I had no idea that I was in for a complete shift of view on children’s books, illustration and storytelling. 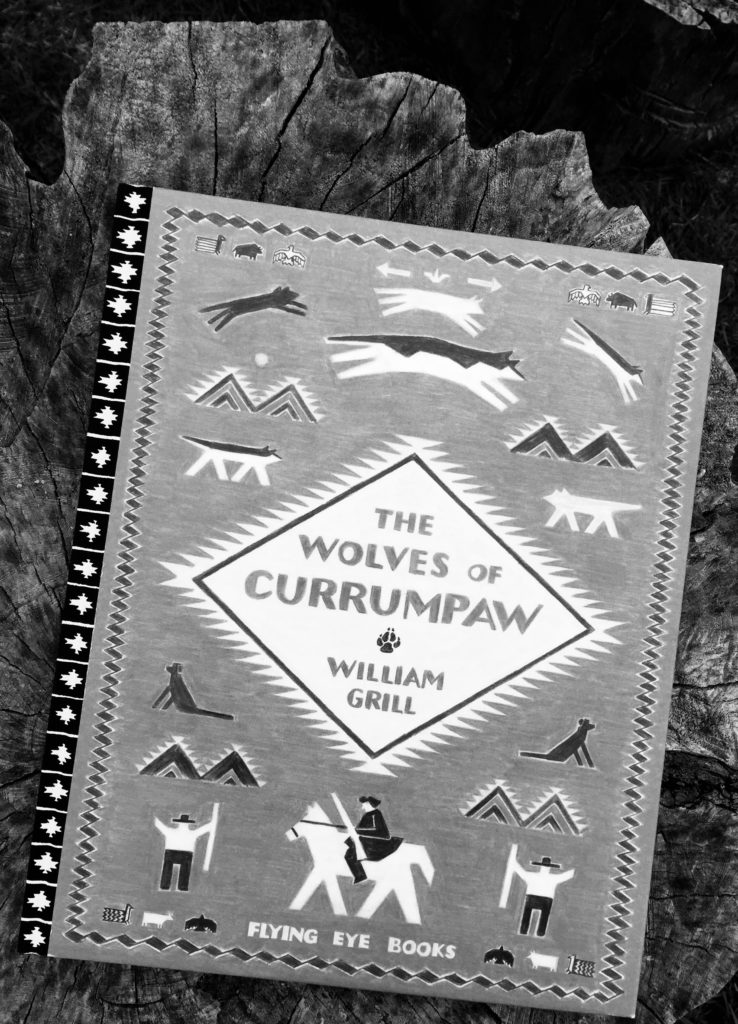 Book cover craftsmanship (or why we should definitely judge a book by its looks). “I like how some of the American Indians’ blankets and tapestries tell stories or contain symbolic imagery. I wanted this to be an obvious connection as their culture and art ties in with the historical and environmental theme of the book.”

My son loves drawing, colouring and experimenting with colour: his cows are red, his squirrels are mauve, his zebras are blue. Quite a statement! And I love it. But when I first saw him drawing a pink horse, I made one of those monumental mistakes I have been trying not to make as a parent: I told him “Don’t draw it like that, there is no pink horse!” As soon as I finished my phrase, I realised the enormity of my narrow-mindedness and misjudgement – discouraging my child to explore his own ideas and feelings, to express himself, to give free rein to his imagination. Because, at this age, kids’ drawings are characterized by absolute freedom and their lack of resemblance to the real world. Children do not try to capture what they see but rather what they imagine, experimenting with colours and shapes, and, yes, green cats and five-legged dogs. It’s complete freedom of the mind, something priceless that we, as we grow up, will try the rest of our lives to recapture without succeeding.

This is the kind of creative freedom William Grill’s illustrations evoke. Not that they don’t reflect reality (all the more so that his book is based on real events and his images show an obsessive attention for details), but his style of drawing, those effortless, unrestrained, natural-flowing, child-like (in the best possible meaning) strokes of pencil leave enough room to the imagination. It’s the most striking feeling.

“While looking out over the Currumpaw I knew this view had to be the shot that established Lobo surveying his kingdom.”

The Wolves of Currumpaw is based on a true story, but made accessible to children – a re-telling of Ernest Thompson Seton’s wilderness drama Lobo, the King of Currumpaw, originally published in 1898. The book is about a notorious wolf pack and the man hired to trap their leader. This is the tale of how one remarkable wolf changed a hunter’s life and led to the formation of wildlife conservation societies across America. It is a fascinating book as much as it is deeply moving and educational, provoking feelings of empathy for the wild life and outlining the importance of respecting nature and cultural diversity.

William’s own text accompanies his drawings, but the images could very well tell the story without the help of words, as they form a complex and complete visual narrative that captures your interest, eye and imagination from the very first to the very last one.

And what’s even more extraordinary is that, as William Grill confessed in an interview for The Telegraph after his first published work, Shackleton’s Journey (another beauty of a book that’s next on my list), for the author, the idea of narrative non-fiction grew out of his struggle with reading. “I’m dyslexic so most of what I read when younger was comics and graphic novels. I watched a lot of animation. I was intimidated by books but I still liked stories, so that’s how the book came about. Me being such a bad reader shaped the look of the book: I had to draw everything out and explain it through pictures, to make it as clear as I could.”

As part of the research for his book, William went to New Mexico where he drew the wolves at Wild Spirit Wolf sanctuary. “I like the pressure of drawing from life and the way it forces you to engage and make decisions quickly, it’s a great way to absorb what you’re seeing. I can remember far more about a place from a drawing than a photo; what I was thinking, the intensity of the sun to ravens croaking,” he told The Guardian.

I agree. As much as I love photography, it’s always been drawing and illustration that I have felt more strongly about. Illustration is a different mindset, not as accessible, instant and easy to alternate than photography, and it really speaks to the viewer on a more personal level. And when it comes to children, there really is nothing that can sparkle their creativity the way painting, drawing or a beautifully illustrated book can. You just have to hold The Wolves of Currumpaw in your hands to understand why. Every single detail, from the cloth spine, to the cover artwork, feels very much hand-crafted. It helps children dream.

“One of the most memorable parts of the trip was going for a walk up Rabbit Ear Mountain as the moon came out. The huge moonlight sky sparked my imagination; of wolves howling and running through the night.”

This entry was posted in Books, Children's books, Sounds & Tracks . Bookmark the permalink.