There is Roger Federer – What is tennis if not the art of movement? There is Rafael Nadal – What is la terre battue if not the canvas brushed across by the strokes of the master of his art, the king of clay? And there is, of course, the Roland Garros poster art, 38 years of it, as I was talking in Monday’s editorial. 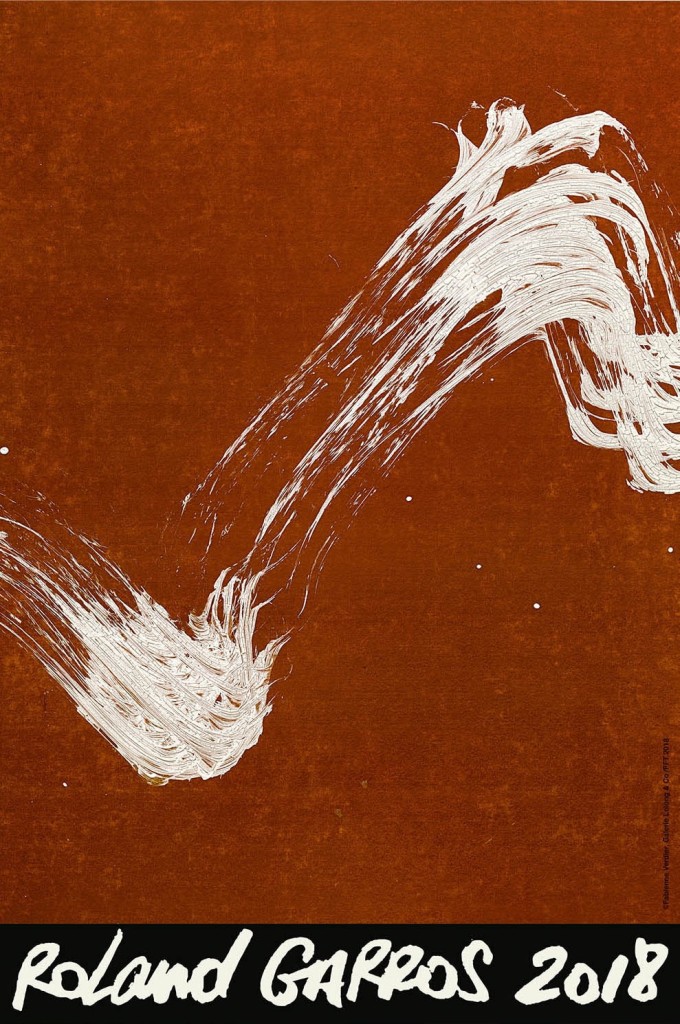 The French have made art part of the majesty of the French Open. The official posters have become a fascinating part of the tournament and have ranged from abstract images that one might never associate with tennis if it weren’t for the words Roland Garros, to very tennis-specific images. This year, Fabienne Verdier was the artist commissioned to do the French Open official poster. She chose to focus on the bounce of the tennis ball. She said: “I tried to portray the lightning speed of the player’s movements. The energy that they transmit to the ball in a movement full of spontaneity, vitality, power, precision and slide. And I imagined one of those unexpected bounces that take the opponent by surprise and force them, in the following rally, to surpass themselves once again in order to get one step closer to victory in Paris.”

But there is something more to it. Ever since I have been watching the tournament (it must be about 20 years), I have associated it with the beginning of summer. The entire clay season (my tennis surface of choice), culminating with the French Open, is like a prelude to my favourite season, preparing me for the magnificence of summer. Fabienne’s following words resonated so well with my feelings: “For me, Roland-Garros evokes those first warm days that herald the arrival of summer in Paris, when the intense light of May and June makes the ochre clay sparkle. As the sun races across the sky, the courts turn from amber to tobacco, from saffron to sepia, from ochre to red, from sienna to brown. During every rally, the balls collect this multicoloured dust and, like comets, leave enchanting lines of energy in their wake.”

But here are some of my all-time favourite French Open posters. 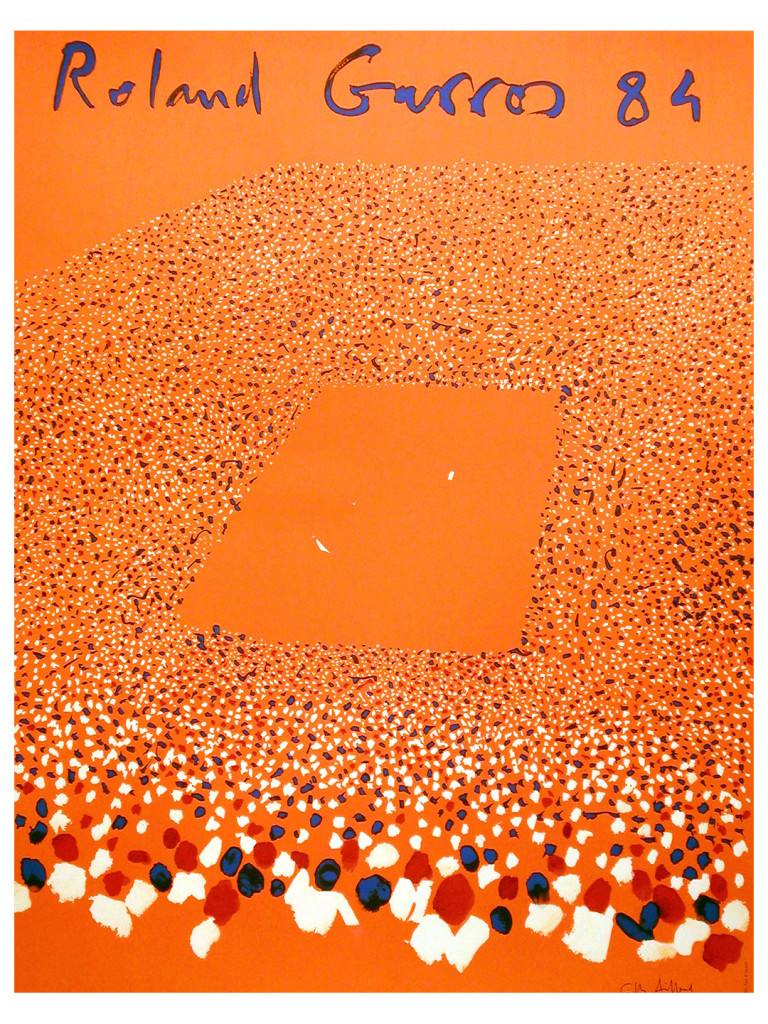 1984: Gilles Aillaud. The perspective of the crowd in the stands. 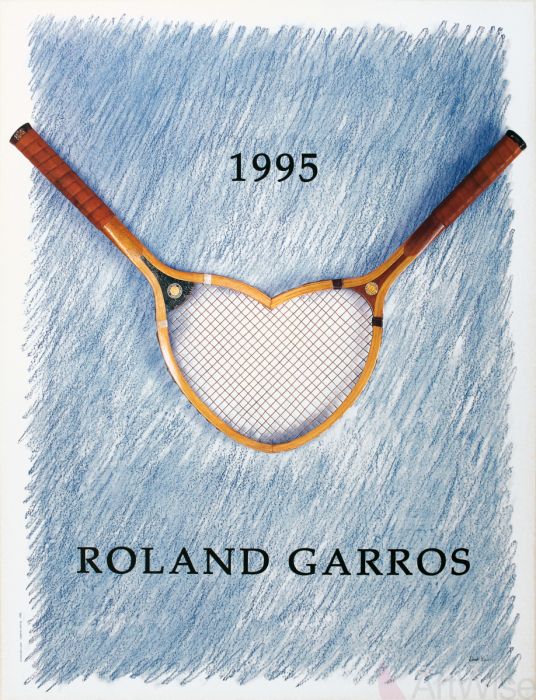 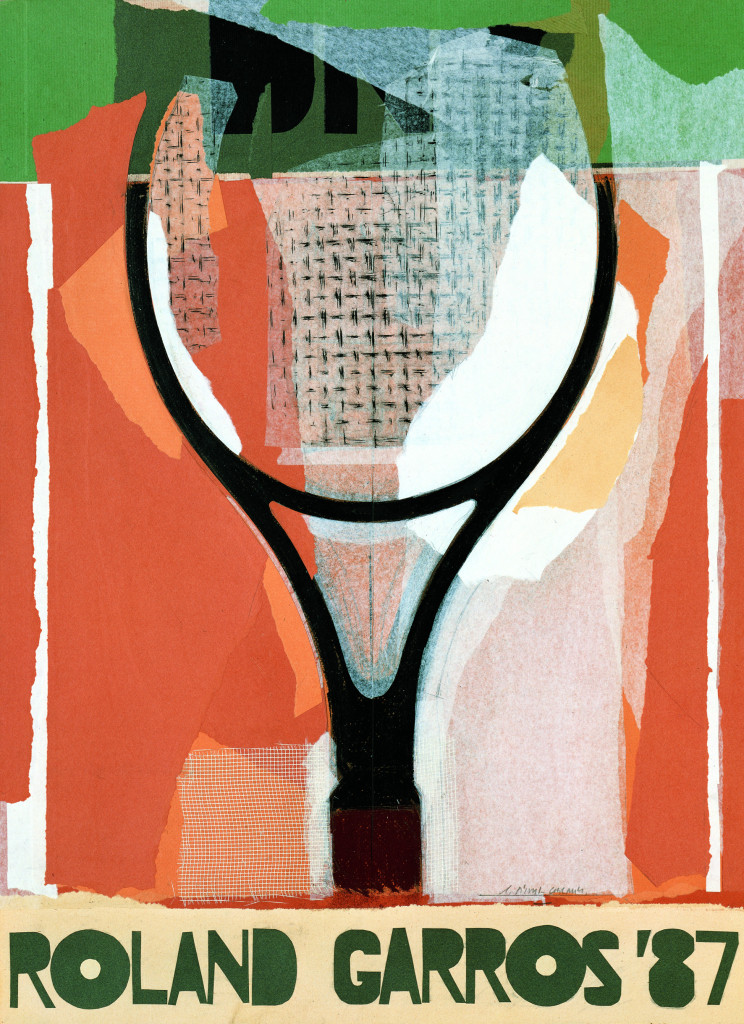 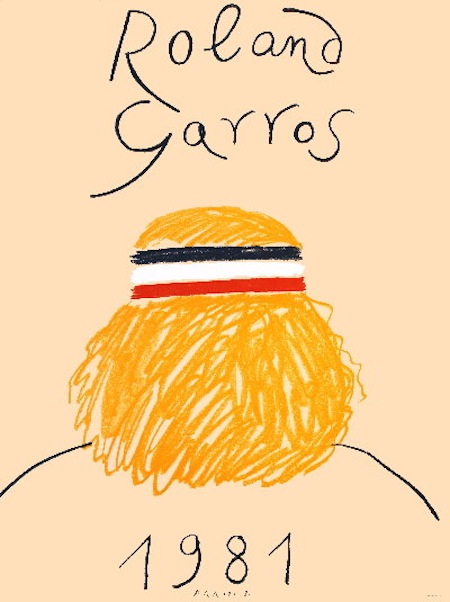 1981: Eduardo Arroyo. The spirit of Roland Garros captured in just a few pencil strokes – a headband in the colours of France that tames the blonde hair as seen from behind of one of the world’s legendary tennis players and French Open winners, Björn Borg. This image from behind forces the eye to look at the horizon, which made the poster even more suggestive after the tournament ended as it marked the beginning of the end of Björg’s career, as the Swedish player won his last of his six French Open titles in 1981. 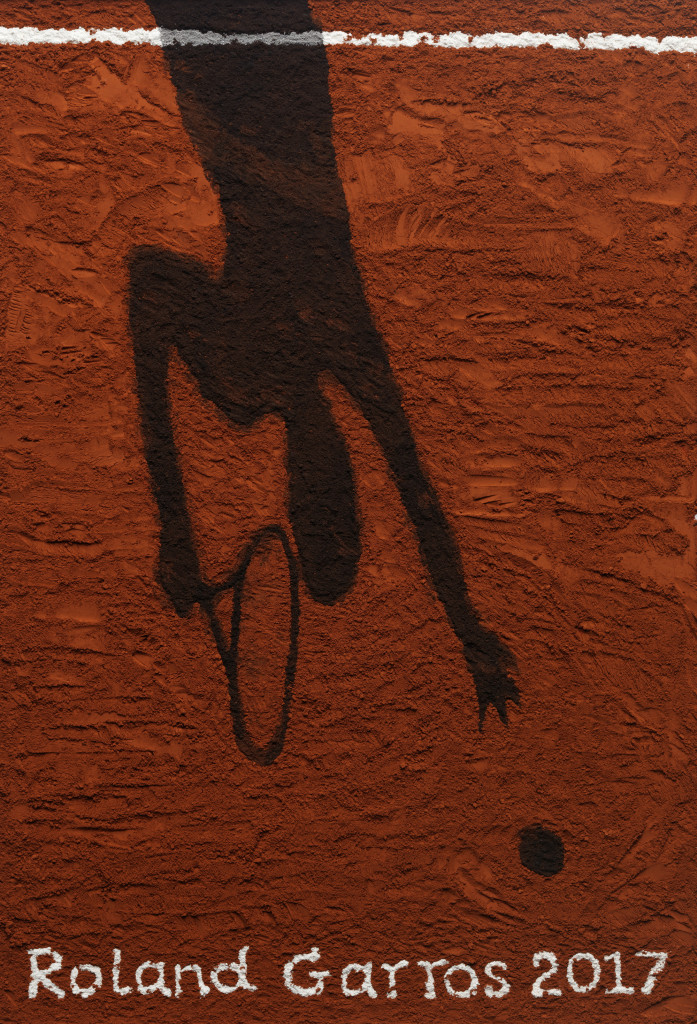 2017: Vik Muniz. It was one of the few times in the history of the tournament when the poster was based on a photograph, that of Gustavo Kuerten serving on clay, celebrating 20 years since the Brazilian’s win at the Roland Garros. However, the process was very interesting. “I started focusing on the colours, and I had to mix several pigments to finally get the precise shade of the clay. The colours truly are from all over the world, as the pigments come from Africa, Asia, and Australia. And since Roland-Garros is an international tournament, you’ve probably got elements in this clay from every nation represented here,” said Muniz. Once done, it was photographed, enlarged and then destroyed. “I see in this a similarity to the fact that a tennis match, the minute it is over, becomes part of our memory. […] And there is also a parallel with the drag net that sweeps away the marks on the court after every match.” 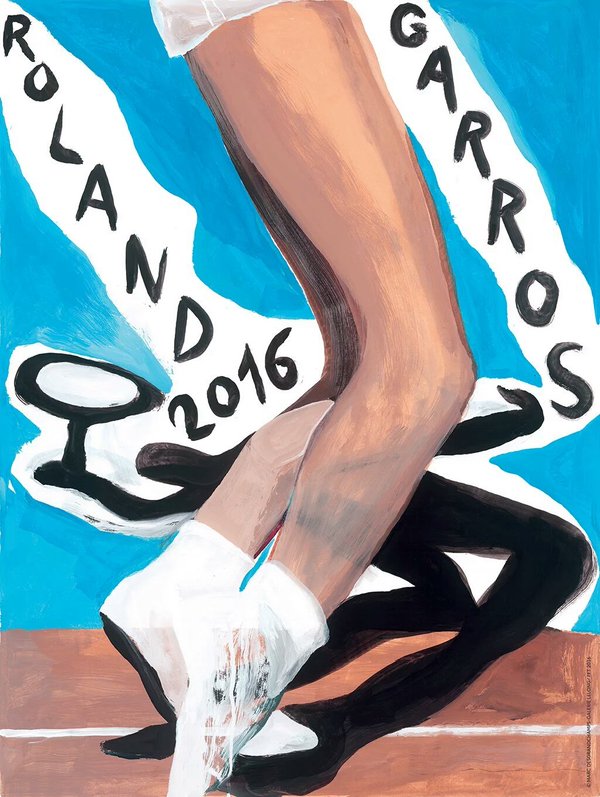 2016: Marc Desgrandchamps. “I created this poster based on photos of players over the past 60 years because it seems to me that tennis was perhaps more artistic. I found a tone and a color that interested me. It really has given the idea of restoring the attitude of the whole body in the shadow. The shadow carries in itself the representation of the body with the movement of the arms which is very important in tennis and the upper body.”

1996: Jean-Michel Meurice. “The surface of play.” The poster features a recurring theme in the artist’s work, the leaf. In the early 1980s, Maurice changed his manner of painting, basing his work on the imprint of a leaf used as a stencil. 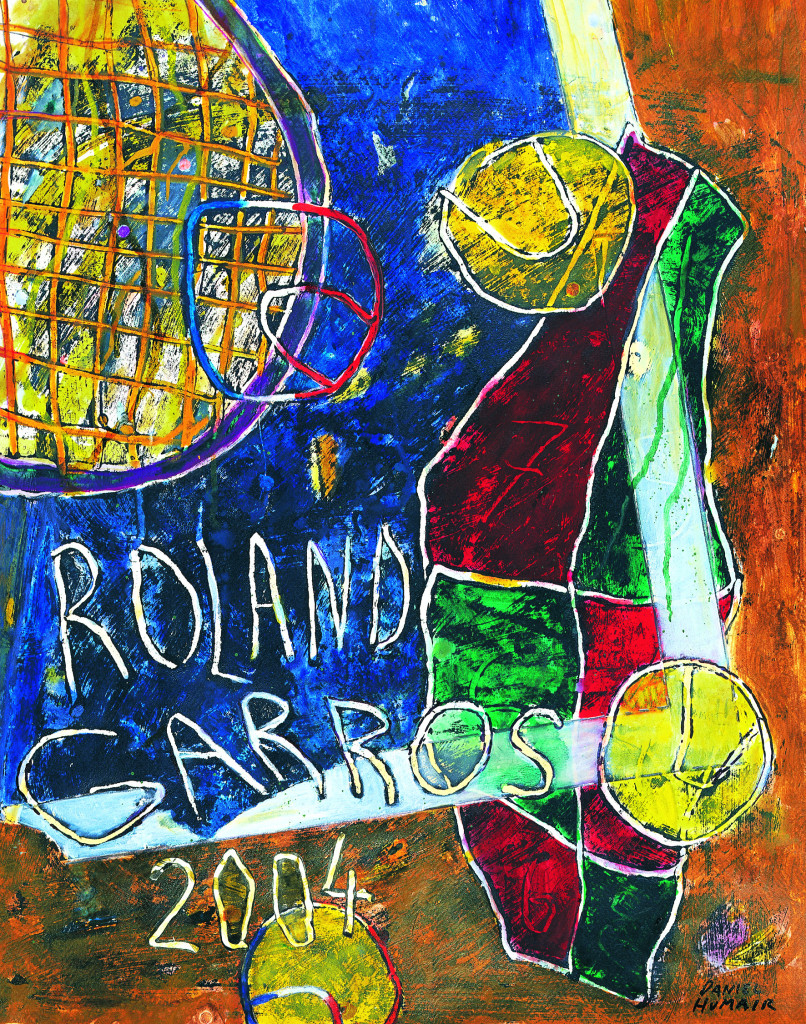 2003: Jane Hammond. “Rock, paper, scissors” were the starting point to develop a “very textured” image, Hammond told Tennis Week magazine in 2003. She made a wall of red clay, placed crumpled pieces of paper on it and attached cutout tennis figures to those. The words Roland Garros were also made of clay. “I wanted to associate two ideas: one, the red earth, which is a subject that I call ‘slow’, the other, the image of tennis, a game where speed is paramount. On the very tactile clay, these additions of movements look like a journey in time.” 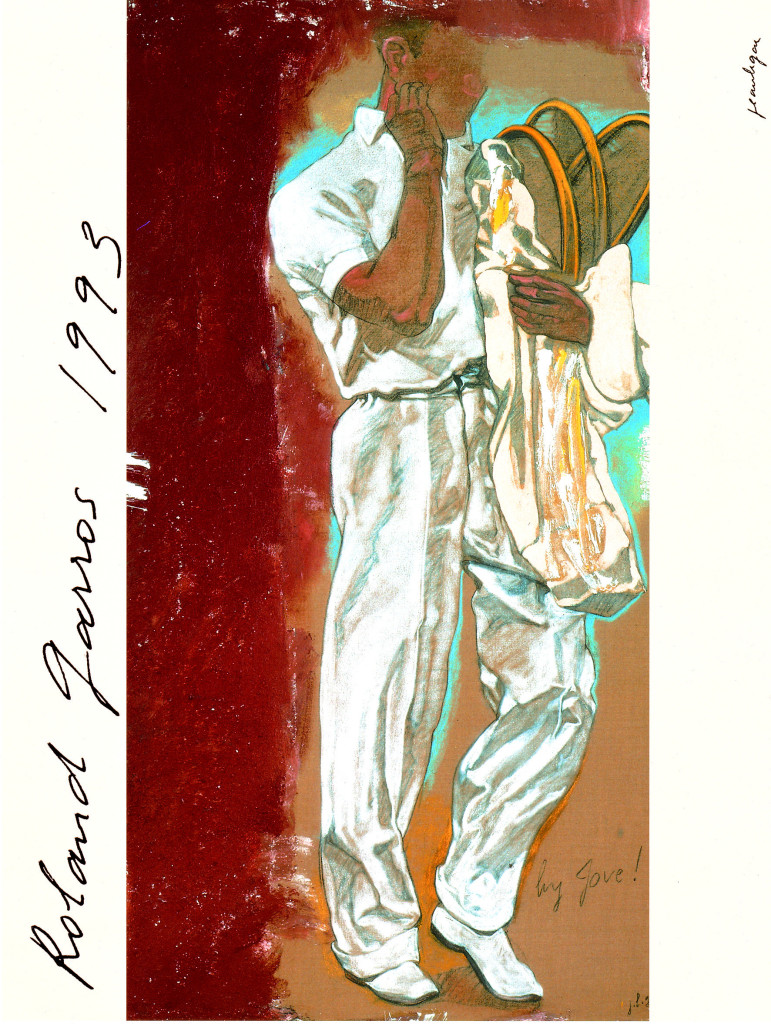 1993: Jean Le Gac. The artist drew on a photograph taken from the magazine Vue, from 1930, showing John Van Ryn, an American Davis Cup player, during a break. 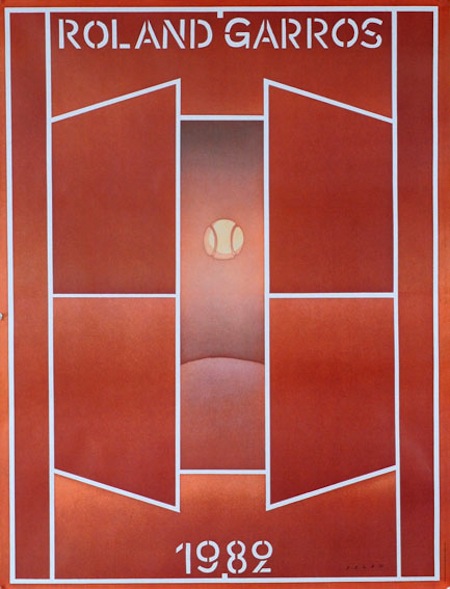 1982: Jean-Michel Folon. “A poster has no time, it needs to speak fast and hard on the walls of cities.” Surrealism inspired: a tennis ball is looming on the horizon like the sun through an opening window that is reminiscent of a clay tennis court. 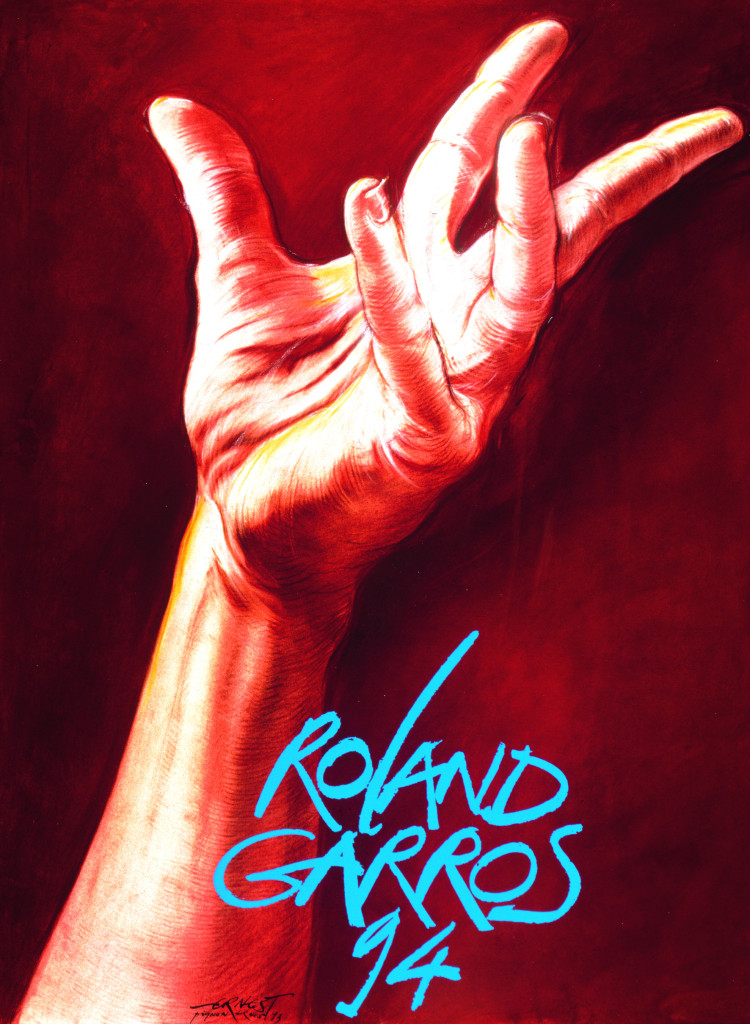 1994: Ernest Pignon-Ernest. “RG is above all the land, so I preferred blood, which conveys a certain sensuality. The universal feelings expressed by this hand are interesting. Open and tense, this hand expresses the stake, but also the fight against weightlessness and self-transcendence.”

This entry was posted in A sporting life, Art, Sounds & Crafts . Bookmark the permalink.

2 Responses to Tennis As Art