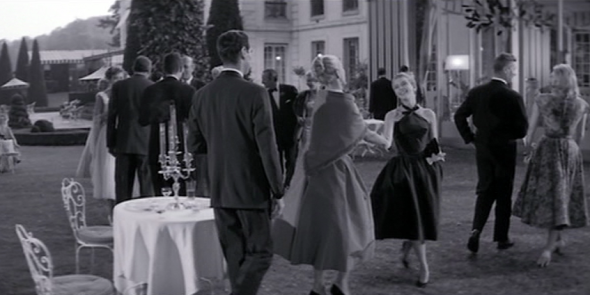 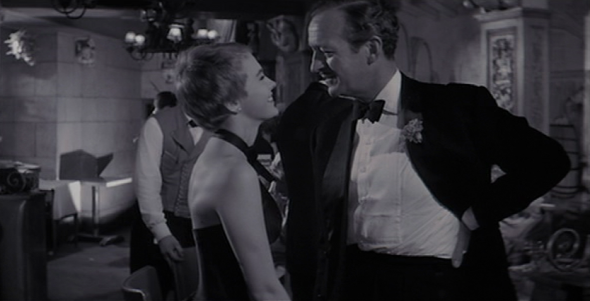 I think I prefer this little black dress worn by Jean Seberg in Bonjour Tristesse (1958) to the one worn by Audrey Hepburn in Sabrina (1954). Audrey’s dress, made by Edith Head after a Givenchy sketch, was chic and girly, this one is glamorous. In my opinion, it should be as iconic as that one, at least. It’s perfect. Seeing it next to a man’s tuxedo is a proof of its flawlessness: its sophistication matches the most elegant piece in the men’s wardrobe. And we all know that you can hardly beat that kind of elegance. The interesting thing is that Jean Seberg’s dress was designed by Hubert de Givenchy himself. He was the designer for Bonjour Tristesse and I think he was in charge with the more formal part of the wardrobe in the movie, whereas Hope Bryce coordinated the rest of the costumes. But more than the design qualities of this little black dress, it’s the deeper meaning it reveals that weighs in the most: the loss of innocence that occurred after that fateful summer, the theme of the child-woman and her sadness at approaching age. It’s the film’s narrative, which is so effectively previewed from the very beginning, in the lyrical title sequence of Saul Bass that “exquisitely captures the elusive delicacy as well as the sadness that lies at the heart of the film,” writes design historian Pat Kirkham in the book Saul Bass: A Life in Film & Design.

, based on Françoise Sagan’s book by the same name, Jean Seberg plays Cécile, the amoral teenage daughter of rich playboy Raymond (David Niven). They are vacationing on the French Riviera (the sumptuous property where they filmed, situated in Lavandou, was Pierre and Hélène Lazareff, made available to Preminger by the press owner and his wife) and their free-going, pleasure-seeking existence is threatened by her father’s sudden plan to marry his late wife’s best friend, Anne (Deborah Kerr). Cécile plans to drive Anne away, but the plot takes an unexpected turn. The masterful use of colour affords a striking contrast between the sun-drenched hues of summer in the South of France and the present, a Paris shot in a chilly black and white – the idyllic holiday compared to the dark reality of the consequences of their vacation. 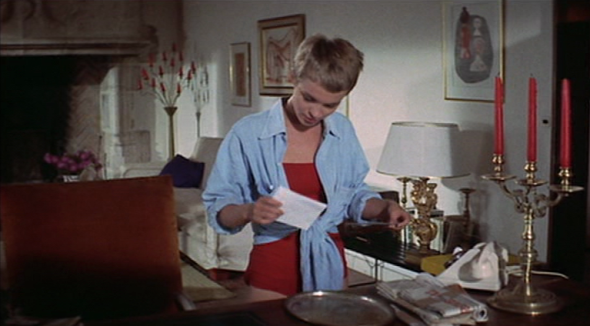 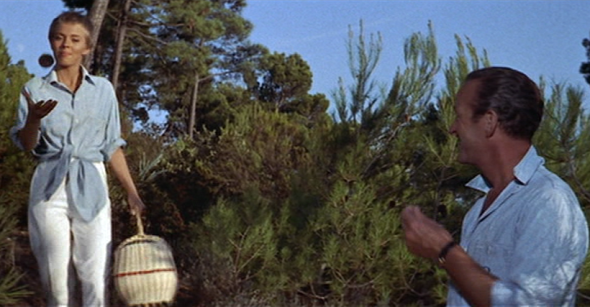 Jean Seberg is the star of the film. “When he organised the ‘Bonjour Tristesse Competition’, Preminger was not looking for Cécile, he was looking for Jean Seberg,” François Truffaut remarked in his book, The Films in My Life. “And, when he had found her, it wasn’t a question of whether she was worthy of Cécile, but whether Cécile was worthy of being made real by Jean Seberg.”

The clothes dress up Seberg’s character only too well: fresh and striking. Her “wide-open blue eyes” have “a glint of boyish malice” and “when Jean Seberg is on screen you can’t look at anything else. Her every movement is graceful, each glance is precise. The shape of her head, her silhouette, her walk, everything is perfect; this kind of sex appeal hasn’t been seen on the screen. It is designed, controlled, directed to the nth degree by her director.” 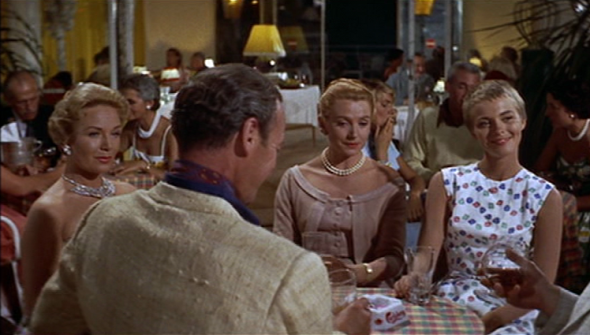 Tiny details (the slit in the neckline) that transform even the simplest designs.

She is a tomboy, a sensuous tomboy. Shirts, men’s shirts to be more exact, are the essential piece of Cécile’s summer wardrobe. She wears shirts stolen from her dad’s wardrobe (a hint at her ties with her father whom she doesn’t want to let go of) tied at the waist and finished with the sleeves turned up just so. She has a passion for denim shirts. She pairs them with colourful one-piece bathing suits, bare feet and her short hair cut, so carefree, so coastal living, but still so individual. Her wardrobe is completed with Breton and gingham tops, boat-neck tops, cropped trousers, shorts slit on the side, white ballerina shoes and flat sandals, and wicker baskets for handbags long before Jane Birkin made her debut in La Piscine (1969). There’s an evening gown too, a floral printed white dress with full skirt, clearly another creation of Givenchy’s. I will however have to think about what Truffaut said: “If Preminger were making Bonjour Tristesse today (ed. note: 1978 was the year when Truffaut’s book was published), he’d probably have Yves Saint Laurent do the costumes.”

photos: stills from the movie

6 Responses to Style in Film: Jean Seberg in Bonjour Tristesse