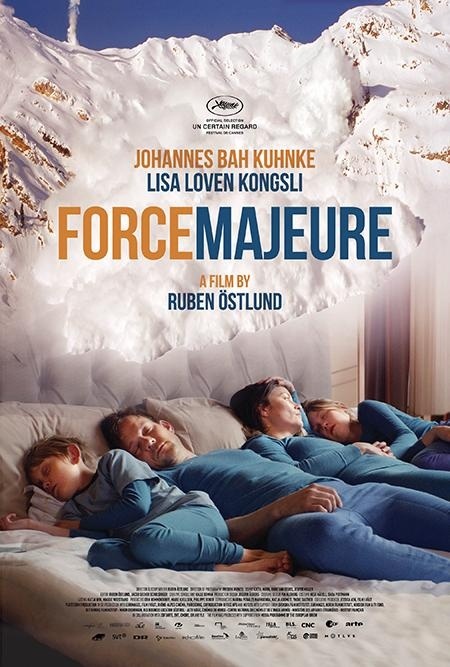 Force Majeure (Sweden), directed by Ruben Östlund, is one of the best films of last year. It was nominated to the Golden Globes for best foreign language film (after having won Un Certain Regard at Cannes), but surprisingly, or better said not so surprisingly, not to the Oscars. I think it deserved a nomination more than Leviathan, for example, a film that failed to impress me in any way and which I couldn’t even watch to the end. But anyway, you don’t need the Oscars to be able to judge a film by yourself.

A Swedish family travels to the Alps for a five-day skiing holiday and during a lunch at the resort’s rooftop restaurant, an avalanche turns everything upside down, after Ebba (Lisa Loven Kongsli), the mother, desperately tries to protect the two children, while Tomas (Yohannes Kuhnke), the father, grabs his cell phone and runs for his life. A great satire, reminding of Ingmar Bergman’s movies, about a family shaken to its core, with a beautifully written screenplay, beautiful cinematography capturing the alien nature of not only the ski slope, and excellent acting, including the two little children. The film is a great character study and sometimes wickedly funny, without diminishing the permanent anxiety hovering over though, as if you are expecting another dramatic thing to happen any moment. One last thing I’d like to mention is that I don’t understand why they have changed the name of the film in English (into Tourist), as it takes away the essence of the subject.